All artists collaborate; it is the nature of the creative process.   Here are just a handful of examples. 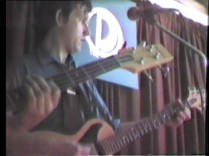 Although only together for a comparatively short period, the band were a unique collaboration.   The core of Andy Snelling (bass), Chris Twigg (lead guitar) and Ralph (rhythm guitar and vocals) appear together in the very rare "In View" .  The footage was recorded by local documentary film maker "Pete the Wiz" and features seminal recordings of "The Journeyman"  and "Starfighters Hit Zero" 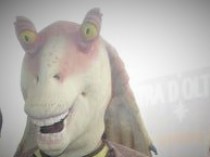 It is perhaps fitting that Edsel Kragg should appear as one of the masked protesters in the film "V (for Vendetta).    If people find Ralph's blend of drama, comedy and music an acquired taste, Edsel's performance art takes eccentricity to new heights.  Never seen in public without a disguise and appearing under a whole series of nom de plumes his is one of the strangest stage acts anyone will ever witness.   Johnny Cashbox sometimes occupies the stage with him, and his antics are legendary.   On one occasion,  Edsel asked Johnny to appear in a tuxedo with bow tie in order to accompany a version of "Always My Mind".     When Edsel appeared behind a small lecturn on the stage of the Quay Theatre in Sudbury, he was wearing the largest tuxedo anyone had seen and wearing a Jar Jar Binks mask.   Just as Johnny was playing the introduction to the song, Edsel stopped him, apologised to the audience and asked them if they would mind if he took his jacket off as he was feeling rather hot under the stage lights.  Upon removing his jacket he moved centre stage and the audience could see that he was wearing full diving tanks and flippers on his feet.   This wonderful comic treasure conceives and edits most the videos for Johnny Cashbox & TheDragonflyRising. 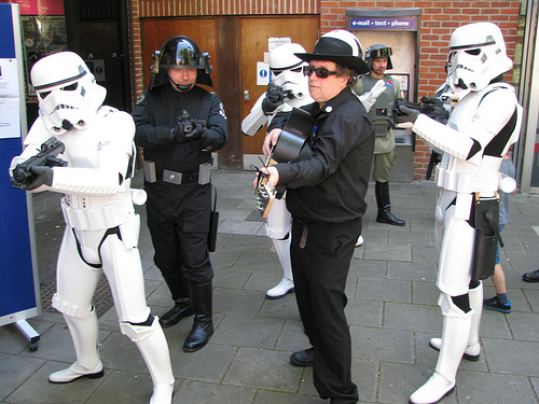 Ralph has often described "Invasion Colchester" as the jewel in the Colchester crown.   It is life-affirming example of how adversity can be turned into something that benefits everyone.   Not strictly a collaboration,  but certainly a sharing, it is one the highlights of the calendar.    The conception of "Invasion Colchester" came from a crisis and is the creation of a remarkable local builder, Simon Leonard.   In 2011 Simon unfortunately caught the awful strain of "swine flu"  that rocked these shores.  He was rushed into a hospital in Leicester and placed on an extra-corporeal oxygenation unit.  This is a highly specialised piece of equipment and was needed to maintain Simon's breathing as his lungs had failed.   Simon was kept under constant nursing care and stayed on the machine until his lungs began to function on their own.  His life was saved by a mixture of advanced technology and the nursing "angels" at the Leicester hospital.   Simon, by nature a very caring man, wanted to do something to help the lives of those who had literally saved his own.  As a costume re-enactor,  he created "Invasion Colchester"  and with the support of local business woman and sci-fi fan, Kerrie Williams saw his vision realised later that year.   "Invasion Colchester"  is like no other sci -fi convention or event you will see in the country.  On one day a year hundreds of characters, vehicles and props appear and land in the middle of the town.   They engage with the public and create magic that helps to raise funds for local and national chartities and good causes.   It is the best example of "the force" made good.   Simon is an inspirational man and Ralph is extremely honoured and privileged to be involved.   Initially invited to sign autographs for charity,  Ralph usually appears now as Johnny and generates his own blend of mayhem and has become yet another layer to this wonderfully rich cake. 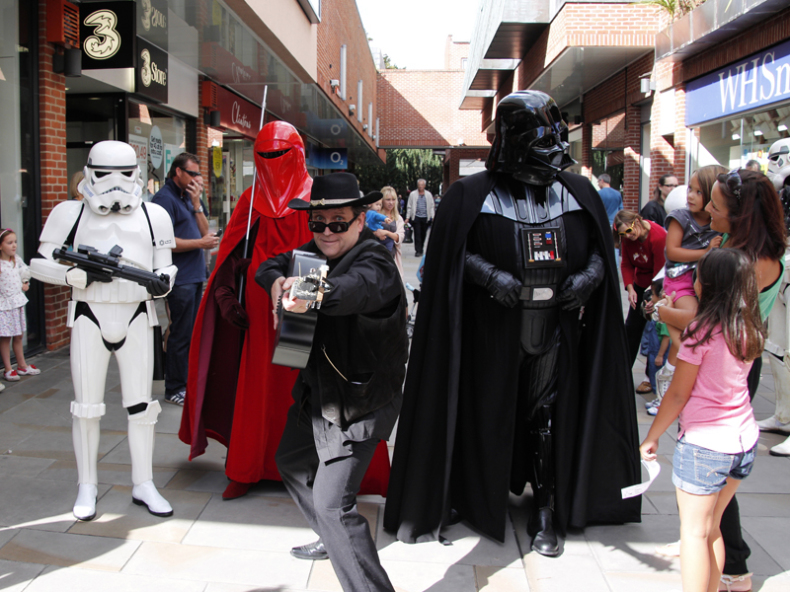 - "The jewel in the crown of our oldest town"

Thank you for visiting Ralphmorse.com.      If you would like to see more of his antics why not visit the "JohnnyCashbox" channel at youtube where you may be in for a few surprises.   ... The journey continues ...