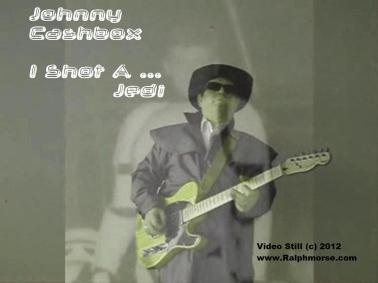 Who is Johnny Cashbox and exactly why is he a "universal superstar"   My name is Robert Williams, an investigative journalist, and I will tell you why! 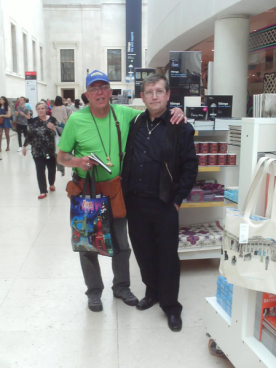 Ralph Morse and Les Mason at the British Museum

(Some would say the best place for them)

Ralph has performed music, in one form or another, for most of his life.    At around the age of twelve his voice started to "break" and by the age of thirteen he found he had a depth and resonance to his singing that most people twice his age did not have.   Once cast by Victor Moll, his drama teacher, as Captain Corcoran in Gilbert and Sullivan's "HMS Pinafore",  Ralph became greatly interested in the rest of the comic operas and was soon heard singing some well known bass and baritone arias whilst doing his paper round.   Not holding back, these were performed with aplomb and and at some volume.   Yet, considering the time of day, he only ever received one complaint, and even that was not of the type he might have expected.

"My boss, got a call from a customer who complained that he had overslept because he hadn't heard my singing one morning.  He said I was generally more reliable than an alarm clock.  On this particular day I had been unwell and the customer was consequently late for work."

Ralph's individual approach to light opera earned him the title of "the singing paperboy" and he was subsequently the topic of a number of newspaper articles and received invitations to sing at functions and offers to join local operatic societies.   He even considered becoming an opera singer but decided against it.

"I was advised that if I were to take up singing seriously the training would not only be rigorous but also restrictive.  I used to put on funny voices, do impressions and also sing rock and roll and was warned that to continue to do so could at worst seriously damage my voice or at the very least undermine my potential."

Attitudes have changed in the intervening years and there are now a number of highly successful "crossover" artists.   As it was Rose Bruford College developed Ralph's vocal talent to serve an area for which it is eminently suited; musical theatre.    Roles in the professional theatre as diverse as Caiaphas "Jesus Christ Superstar"  and the MC in "Cabaret"  have allowed Ralph to maintain his musical roots throughout his acting career.

"The Coven Club", "Polarity" and "Outlaw"; some, but not all, of Ralph's previous musical incarnations.

Ralph has always had eclectic musical tastes both as a listener and a performer.  This is reflected in the diverse styles he has embraced over many years.  His current incarnation, "Johnny Cashbox" is as much an extended acting role as a musical one.

When Johnny Cash died in September 2003,  Ralph was already performing a country related act in day centres, residential homes and small clubs under the name of "Outlaw".   He very soon started getting requests to cover more "man in black" songs than any other artist.   Although he didn't particularly look or sound like Johnny Cash what he did possess was a masculine voice rich in resonance that suited the material well.  Whilst the tribute act is not a road Ralph has chosen to follow, a quick listen to some of Johnny Cashbox's recordings and you can hear the similarities.

What he has created is a unique, wonderfully comic musical character who is engaging and entertaining,

A chance meeting in 2010 with Les Mason, (former Coven Club guitarist) rekindled their desire to play music together and soon after "TheDragonflyRising",  (with ex-Visigoth Disorders Sue "Culture" Jones on bass and Leo "Rude" MacGregor on drums and percussion), formed both as a entity within its own right and as Johnny's backing band.    Ralph's association with science-fiction and Star Wars in particular has influenced and informed his songwriting and the band's repertoire includes many space themed original works;  "Starfighters Hit Zero", "Am I All That Is Left Of An Empire", "The Journeyman", "Blue Angel", "We Come In Piece", "Live In Area '51", "I Shot A Jedi" and "Johnny Cashbox - Universal Superstar"      "TheDragonflyRising" also appear under the following guises; "The Pelmet Overload", (Velvet Underground covers) and "The Renegades From Quark", (Sci-Fi conventions).

Why is he called a universal superstar?    Ralph explains.

"As Johnny has grown he has developed close ties with the sci-fi community.  Even his name would not be out of place in a Star Wars movie.

In 2015, I felt it would be fun to extend these links a little.  What if Johnny believed he was not only a famous performer on Earth but also throughout the galaxy?  He would then truly be a universal superstar.  Part of his charm, (and the opportunity for comedy), rests in his delusions about himself.

He is a constantly evolving character and an absolute joy to portray."

What next for Johnny Cashbox?    Who knows,  the universe is his very large oyster...

... but why not check out some the videos at: https://youtube.com/user/JohnnyCashbox

"The One and Only Universal Superstar!"