As a performance artist, Ralph may be involved in several projects at any one time.  This page contains just three examples that give a flavour of his work. 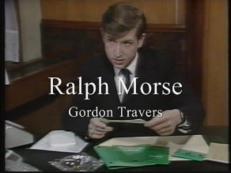 From the outset Ralph was heavily involved in a whole range of training projects.  In the late 1970's and 1980's he worked as an actor and occasional writer for a number of airlines, building companies and high street banks.  Most notably for two years, as Gordon Travers, he was the face of Lloyds Bank, appearing in a range of commercials and staff training films,   As a teacher in the secondary and further education sectors he also created and presented a number of in-service training programmes in voice and public speaking.   Unlike actors, most teachers receive no formal vocal training and yet tend to use their voices for longer periods with all the associated problems.  Working in greater London and East of England, Ralph was able to train both newly qualified and experienced staff in techniques designed to help them protect their voices and improve their speaking range.  He has also run adult evening classes in drama training,   Since leaving full time teaching in 2003, Ralph has offered his services freely to the charity and voluntary sectors. 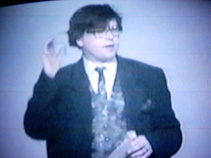 While teaching A Level Theatre Studies in the early 1990's Ralph looked for, but was unable to find a production that incorporated the styles of the four main practitioners;  Antonin Artaud, Constantin Stanislavski, Bertolt Brecht and Edward Gordon Craig, so he created his own., including writing three of the four plays that he used to explore their ideas.

"The Ghost Dance" traces journey of Wovoka, the Paiute messiah and his followers as they attempt to use their spirituality to ward off the policy of "Manifest destiny" that was imposed on the native american people.  This reaches a climax with not only their physical deaths, but also the destruction of an ideal at Wounded Knee.  The presentation explored Artaud's "Theatre of Cruelty".

"Malleus Maleficarum", co-written with Ralph's wife Carole, focusses on the spurious investigations of self-proclaimed "Witchfinder General", Matthew Hopkins as he systematically oversaw the execution of the innocent, for financial gain, during the Civil War period.   The piece was presented using Stanislavski's "System" of naturalistic acting.

"The Exception and the Rule"  is a short Bertolt Brecht play,  directed by a colleague that highlighted his "alienation principle" and the "lehrstuke" (learning play).

Lastly, "The Bridging Zone", set in a dystopian future explored the ethical dilemma of whether historical change brought about through time-travel is morally right.   The staging, including pillars, atmospheric and smoking effects was presented incorporating the staging ideas of Edward Gordon Craig.

The premiere in Brentwood was seen by students, teachers and lecturers from educational establishments in London and East Anglia.

Performing in the retired community gave Ralph an opportunity to witness first hand some of the issues that impact upon them.  "Who Is Leonard Jones?" produced in association with Age Concern, Colchester (now Age UK), is a two act comedy drama with very serious social undertones.   Although several characters do appear during the play, the vast majority of the narrative is experienced and seen through the eyes of Leonard who talks and reacts to persons that the audience cannot see but can sense through his interaction.   During Act 1,  set in 1997 Leonard's beloved wife Maureen dies and we witness his grief, fear and loneliness often when he is talking to her in the cemetery.  These scenes are both sad and comic and also incorporate references to the tragic death of Diana, Princess of Wales and Tony Blair's new Labour government.  At the beginning of Act 2 set in 2007, we discover that Leonard's link with the outside world and his emotional crutch, the local day centre, that has helped sustain him for the past decade is now due for closure as it is not compliant with the new regulations for disability access.

In a fit of inspiration, Leonard contacts a local musician, through which he becomes a rap artist and raises the money to save the building.   In the final scene, now well into his eighties, Leonard finds love again and seeks the blessing of his beloved Maureen.    To both break up the action and provide musical interludes, Johnny Cashbox performs a number of songs between the scenes that work both within their own right and move the narrative forward.

After the initial run at Colchester Headgate Theatre,  Ralph gave a number of separate performances within the local area. 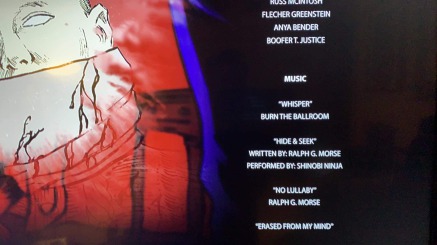 In 2017 Ralph began a rewarding artistic association with American actor Wes Lee and film producer and director George Dibble of Elysium Productions in the United States.

The association began with Ralph's "Star Wars" themed Radio Story, "The Secret"  which covers the period between from the end of "The Return of the Jedi" and "The Force Awakens".

"It was a great experience for me to see how Shinobi Ninja transformed "Hide and Seek" into something very now and rather wonderful", Ralph explains.  "Volkov"  was released in 2019 receiving many accolades and awards.   It is available to view in the Uk via Amazon Prime.   Following on both the film's success, and the various strands in the story, it was decided to extend the project to a full feature film, "Volkov : Origin."    Ralph was extremely honoured when Wes and George invited him to write the screenplay.  As at November 2019,   the film is in pre-production in the United States.